I’m hoping you’ll forgive me for being a bit tongue-in-cheek here. If that’s even the right phrase. Whatever!

Have you ever tried to communicate with a person who spoke the same language as you, but your backgrounds were so different you didn’t understand each other? That’s how I feel sometimes when I’m talking to someone who knows very little about auditions, onscreen or onstage productions, or the studio recording process.

The first barrier to communication here is that the other person is probably a regular enjoyer and consumer of entertainment. So when we start discussing the creation of music or TV or live shows, they often feel like they know what they’re talking about. They usually don’t.

The second barrier is that it’s damn near impossible for a performer/artist to be emotionally detached from their professional results. So my well-meaning friend might ask me about a recent shoot or tryout just out of curiosity, with no idea that he’s grating on my nerves because I’m still allowing myself to feel upset that I didn’t do well, or wondering when they’re going to announce who got the part, or whatever.

While this divide will never completely disappear, I thought I’d contribute a few tips to the “normal” folks out there to keep in mind when you’re interacting with someone like me. Here are three things NOT to ask your artist and/or performer friends … 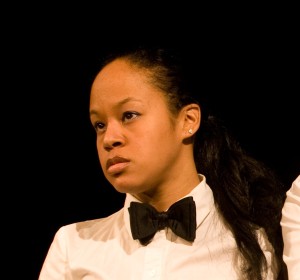 Right off the bat, let me say that artists will ask this of other artists all, the, time. This is because they understand the process firsthand, and it might even be a matter of comparing experiences auditioning for the same person or production. But if you aren’t an artist, it might be best to keep your mouth shut until your artist friend volunteers information about it.

You know how it feels when you’re job-hunting? Sometimes exciting or challenging, but more often frustrating and tiring? That’s how auditioning is, but with more of a personal buy-in and in some ways more pressure, and typically with less prep time. If I have just delivered my song and/or lines to strangers and interacted with them while continuously asking myself “Is this going well?” and you’re now asking me “Did you get it? … What do you mean, you don’t know? … Well, when will they tell you? … What do you mean, you don’t know?” … You’re not likely to get a smile from me. Not only am I (because I’m a tortured perfectionist) already knee-deep in self-admonishment about things I should have done differently; I’m also trying in vain to stop thinking about it because there’s no point rehashing anything that just happened and I’ve either got to focus on my next audition or focus on something else to distract me from the fact that I don’t have any other auditions lined up yet. Don’t worry. If the audition went well, you can trust me to tell you about it. (And even then, it’s best not to keep asking me whether I’ve heard back yet. Just try to do what I try to do and stop thinking about it.)

I get it. You think set life and studio life are glamorous and interesting. Sometimes that’s true! But I’d much rather you get your fix of celebrity (hahaha!) fun by doing something other than following me to work. The most obvious reason for this is that I want you to see a finished product, not the often-ugly process behind it. I don’t necessarily want you to hear the ugly process either — even I can’t stand listening to the playback from my takes in the recording booth half the time, so why would I share that dirty laundry with you?? The other reasons sound something like this …

One of my closest friends came with me to a recording session when we were in university. (Bless her heart! I think I invited her, back in the day before I knew better.) By the time we finally got home we had heard the friggin song five bazillion times and caught what sleep we could wrapped up in our coats on the dirty carpet of the studio. Sounds like fun, right? She wisely chose not to attend the video shoot for that song, which ended around 5am and was not nearly as fun as I’d hoped. Laughing at things that no one else found funny (like coffee being spilled on the equipment, and the video girls continually giving stinkeye to the camera and the singer) was all that kept me sane that night.

You know those behind-the-scenes features that let fans get a look at the creative process? Trust me; in most cases, you don’t want a closer look than that. If I feel it’s important to have you there because you’re part of the project, or the song is about you, or whatever, I will ask you to come in at a mutually convenient time. And if you choose to ignore this advice and pester me until you do end up on set or in the studio, don’t complain about how bored you are. I knew you’d be bored on set because I’ve spent hours being bored on set for you.

This is a big one. Your photographer friend, your cousin who plays in a jazz trio, your professional dancer girlfriend, and your uncle who does work on the radio probably all think very highly of you. But it puts them in an extremely uncomfortable position when you ask or expect them to do those things for you (or worse, for someone they don’t even know) without pay.

If a free or discounted service or product is offered by the artist, that’s one thing. That means they’ve already considered the financial loss, the potential gain, and the value of them offering that to you as a gift. And just like in non-artistic fields, if you don’t agree with the rate, you’re free to negotiate or look elsewhere. So know that this tip isn’t about those circumstances.

This tip is about assuming that because I love singing, I should sing at your event for free. After all, you love writing short stories, and one day you gave me one you wrote just for me and you never asked me for a penny. Here’s the thing — if your income is derived from your nine-to-five(s) and not from your short stories, your art is a hobby. Mine is a profession.

There are lots of other reasons to refuse these requests. Your uncle might belong to a union which has rules against him doing voice work for free. Your cousin has put more time and money than you are aware into their art (and so have the other musicians in that trio). Your girlfriend may be losing money just by attending your party instead of being paid to dance  somewhere else that night. And if your friend’s pictures look good enough to capture your neighbour’s wedding, doesn’t he deserve compensation? So while we’re still new and learning, by all means, let’s talk discounted rates. But when we’ve reached the professional level, please respect that the same way you respect the work and rates of professionals in other areas. (While we’re on the subject, one of my singer friends recently told me that she’s singing for free at a family member’s wedding because her mom accepted the booking on her behalf. Do you know any doctors whose mothers  arrange for them to do unpaid surgeries as a favour for someone else? Give me a break!)

Wow, this ended up being a long piece! But I hope this has helped some of my people … my talented, hardworking, often underappreciated, sometimes overly idealistic but nevertheless brave people … to be better understood by the normal population. =)