I spent a good part of this morning reflecting on what an awesome week I’m wrapping up. Lots and lots of high points, and the Caribana parade yesterday was one of them, but not #1 on the list — which was a little bit of a surprise for me.

Some background info for you: this was my 9th year playing mas here in Toronto and I, LOVE, Caribana. It’s helped me connect to my Caribbean roots, reunited me with people I rarely see, and (after my extreme shyness in my debut year) it’s provided me with a nice little boost of self-esteem. 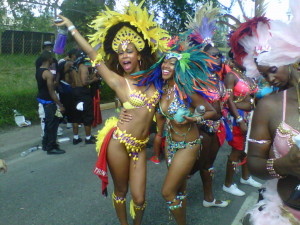 with the homegirl Sabrina from Calgary!

But although the weather was nice, I was surrounded by soca, I felt good about how I looked, I was with friends all the way down the road and back, and I didn’t lose anything (how many masqueraders have painful memories of phones and cameras getting stolen or ruined en route?), it felt different. I felt different. I used to feel like playing mas in Toronto was the ONLY place for me to be on a Simcoe Day long weekend Saturday … and now I feel like that’s just one option.

It seemed like there were fewer spectators alongside the parade and it was weird to have none on the north side of the street for a good chunk of it; I don’t know how everyone else feels about the altered route this year, but I didn’t notice any improvements as far as wait time, organization, or the flow of vehicles and people.

Maybe the extra bodies I’m used to seeing on the other side of the fence were the people mashed up against me on the road. Listen, I know that the mingling of costumed masqueraders with everybody else is kind of a trademark of Toronto’s carnival, and full disclosure: I used to do it too! But it is really getting out of hand. If I am in a costume and you are not, and you’re asked to get out of my show area (my “stage”), leave. I’m there for you to look at, not to dance with. If I want to come hang out with you, text me to meet you at post #355 or wherever and we can make it happen. But when the music has to stop because of you, or the truck has to stop because of you, or the DJ is trying to explain nicely why you shouldn’t be here when he’d really rather cuss you out and so would I, you are messing up my experience. Gweh. Lots of pretty people in pretty costumes go outside the fences to get food or just to hang out, so no worries, it’s not like we’re completely inaccessible if that’s your issue.

There are lots of other external factors I could pick at … in fact I’m working on a Fetiquette blog post so stay tuned for that … but I realize it’s probably just me. I am (a) going through one of my moods, (b) outgrowing Caribana mas, or (c) both of the above. The mood swings, those are pretty par for the course and it has been an emotional spring/summer for me. Outgrowing things that you used to live and die for when you were young, I guess that’s normal too (even if it doesn’t always feel good). So I guess we’ll have to wait until next year to see whether Caribana 2013 was “de las lap” for me.

The two ladies on the ends, Fiorella and Jenny, are repping Saldenah (congrats for winning Band of the Year!) and Tiff and I are both with Carnival Nationz. 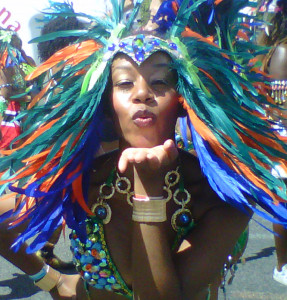