I first played mas in the Caribana parade in 2005, so this was my tenth anniversary year, and the explosion of Caribana-themed #tbt pics on Instagram this summer (even though calling something a throwback when it’s from two weeks ago is my newest online pet peeve) inspired me to rank my costumes so far. I’ve worn more than 10 Caribana/Carnival costumes, when you factor in things like band launches and promo events, but these are costumes that are (or were) mine.

I legit don’t remember the name of the first section I played in, and I didn’t even get any good pictures of me in costume that year. My section was super-disorganized, and there’s no need for me to name the band because karma.

Fortunately my less-than-stellar experience the first time around didn’t discourage me, and by 2007 I was not only still playing mas, I was even *gasp* picking my own costume! 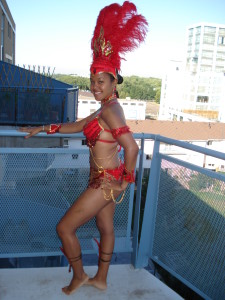 This was the first year I got the costume I wanted the most, instead of going along with cousins who were also in the parade (they played Sexy Clown and Lion Tamer). Carnival Nationz had a circus theme this year, and my Fire Dancer outfit was kinda hot!

The only year aside from 2005 in which I did not play with Nationz was 2010. I don’t remember the theme, and if I was forced to guess I’d say the name of my section was Harmony (?), but this was a smaller band and I realized that I really like the big-huge-band-here-we-come experience much better. 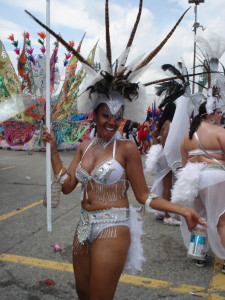 However, wearing all white was a lot of fun, and the bum feathers on the back of this costume gave me life.

Bum feathers would have pushed this costume a little higher up on the scale, but I definitely felt like a bronze goddess in it! This year’s costume, Cohiba, from Nationz’s “Havana” theme. 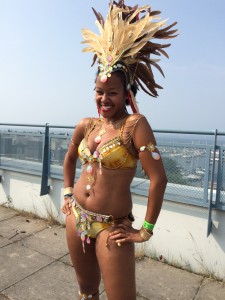 The bra was super-duper comfortable, which was a nice surprise; I wasn’t blown away by the belt, though. I did love the body chain, which I ordered from China while in Dubai because I was so excited that I’d be back home for jump-up. =) (Unfortunately, after two days of wearing said chain in summer weather, one strand broke, the colour rubbed off and my neck and underarms got bumpy and itchy. Please, folks, be careful what you order online.)

My single most enduring memory of the 2008 Caribana parade is being pelted with the angriest rain I’ve ever felt in my life, just before and while we were crossing the stage to be judged. But as our section leader Shawna said, smiling through the rain, “You can’t stop the sun!” 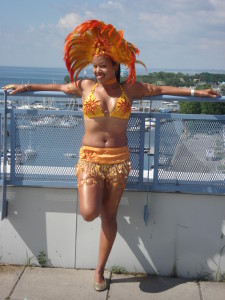 The joke is, the sun came out just AFTER we crossed the stage, drenched and freezing and with pieces of costumes falling off. Maybe our theme, “Pirates,” had conjured up some kind of sea storm on land. The belt, one of my fave things about this costume (simple yet elegant and with coverage), remained unscathed.

This was my first time playing mas with Carnival Nationz, and their theme was “La Copa Mundial” (the World Cup), presumably since Trinidad & Tobago were competing and Caribbeans all around the world were extra excited for them.

I would’ve been happy wearing this or the Spain section, since both were unique and beautiful, but I had a ball in this. All day long people were stopping my cousins and I to ask us “who made that costume?” Denise Chang Kit, thank you very much =)

This was the year Nationz chose the theme “In Full Bloom,” and there were lots of beautiful costumes to choose from. I decided to be extra and chose one that didn’t even have a section. 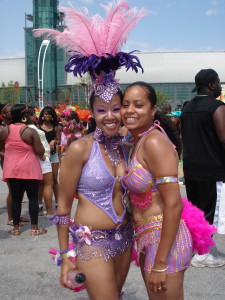 with my cousin Kari!

This was a heartbreaker because my Butterfly costume was incomplete — I had no wings. The wings weren’t made, or the wings weren’t fixed, or the wings were left at the camp — whatever the reason, I was one unhappy loyalty masquerader. I ended up crossing the stage with the Water Lily section and endured many curious stares as people wondered whether I’d made my own costume at home and then tried to sneak in. It was really pretty, and I liked the one-piece, but . . . sigh . . .

Another Denise Chang Kit original. The theme this year was “Empires.” I’d never liked the idea of playing mas in black, but a wicked costume is a wicked costume! And the embellished piece between the bra and the panty was worth every penny at $20. 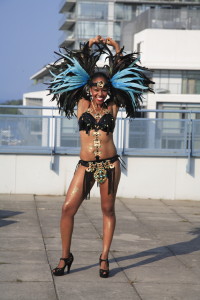 I felt ridiculously sexy in this outfit.

The theme for Nationz this year was “Mythical Creatures.” This headpiece gave me life and it still does! Yes, the costume is pretty, and yes, I loved the cute little jingling noises it made — but really, we all went nuts over the oversized feather mohawk in aqua blue and deep purple. 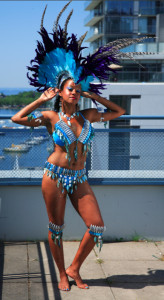 Mind you it hurt . . . my girls and I wore Dr Scholls strips on our foreheads and even with that I had to wad up some toilet paper . . . I felt the dent in my head for the rest of the weekend. But COME ON! Definitely an all-time fave.

There will always be a place in my heart for a bra which is bejewelled within an inch of its life, an unconventionally shaped headpiece, surprising pops of colour, and a set of style-em-yourself body chains. So this costume wins it all. Hands down. 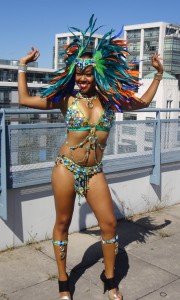 I remember how excited I got when the 2013 theme was announced. “The Reef,” oh man! It’s like Finding Nemo with a soca soundtrack!! Of course the costumes were going to be breathtaking and gorgeous!!! And while I’m still not sure how we came in second place that year, this costume is absolutely my favourite one.

So I’m noticing a trend here and I’m not mad at this at alllll: as the weather gets colder, my career heats up. Last fall I had a spree of auditions and bookings, and sure it’s still summer right now but that thermometer says fall is coming back real soon! Awesome things are happening. Here’s a page out of my dayplanner to prove that when it rains amazingness, it POURS…

Tuesday July 30: audition for a movie starring Whoopi Goldberg, and I made progress in my ongoing search for the right manager.

Wednesday July 31: had an awesome time on an awesome boat ride with old and new friends, and some extremely attractive new acquaintances (hey, all work and no play would make Chattrisse a dull girl); and I got asked to interview Destra, the queen of soca, for a live worldwide audience via Caribbean Connections TV.

Thursday, August 1: I launched my blog (yep, this one – yay!!) and the wonderful Lindsay Holung, a fellow Ryerson RTA grad, recorded me and the wonderful Hollywood Jade doing one of his routines from his Urbanesque class (footage coming soon, I hope).

Friday, August 2: I got to interview Destra, the queen of soca, for a live worldwide audience via Caribbean Connections TV (I’m still so excited! Again, footage coming soon, I hope, lol!). 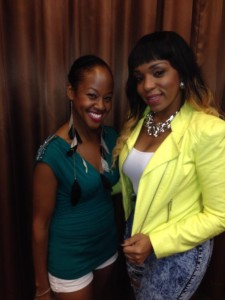 A great live interview with DESTRA

Saturday, August 3: Caribana! Played mas in an absolutely gorgeous costume with Carnival Nationz (for pics and a summary of the day, read this).

Sunday, August 4: Surprise – guess who was the SUNshine Girl the day after the big parade! And then a huge fete to finish off the jump-up long weekend. 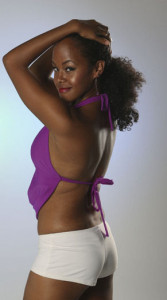 Published in the Sunday Sun – August 4 2013. “When she’s not jumping up, Chattrisse dreams big…” they even quoted my love for KES the Band!

Stay tuned for even more big announcements, coming up soon!

Hope you’re all having an incredible summer too!!!

I spent a good part of this morning reflecting on what an awesome week I’m wrapping up. Lots and lots of high points, and the Caribana parade yesterday was one of them, but not #1 on the list — which was a little bit of a surprise for me.

Some background info for you: this was my 9th year playing mas here in Toronto and I, LOVE, Caribana. It’s helped me connect to my Caribbean roots, reunited me with people I rarely see, and (after my extreme shyness in my debut year) it’s provided me with a nice little boost of self-esteem.

with the homegirl Sabrina from Calgary!

But although the weather was nice, I was surrounded by soca, I felt good about how I looked, I was with friends all the way down the road and back, and I didn’t lose anything (how many masqueraders have painful memories of phones and cameras getting stolen or ruined en route?), it felt different. I felt different. I used to feel like playing mas in Toronto was the ONLY place for me to be on a Simcoe Day long weekend Saturday … and now I feel like that’s just one option.

It seemed like there were fewer spectators alongside the parade and it was weird to have none on the north side of the street for a good chunk of it; I don’t know how everyone else feels about the altered route this year, but I didn’t notice any improvements as far as wait time, organization, or the flow of vehicles and people.

Maybe the extra bodies I’m used to seeing on the other side of the fence were the people mashed up against me on the road. Listen, I know that the mingling of costumed masqueraders with everybody else is kind of a trademark of Toronto’s carnival, and full disclosure: I used to do it too! But it is really getting out of hand. If I am in a costume and you are not, and you’re asked to get out of my show area (my “stage”), leave. I’m there for you to look at, not to dance with. If I want to come hang out with you, text me to meet you at post #355 or wherever and we can make it happen. But when the music has to stop because of you, or the truck has to stop because of you, or the DJ is trying to explain nicely why you shouldn’t be here when he’d really rather cuss you out and so would I, you are messing up my experience. Gweh. Lots of pretty people in pretty costumes go outside the fences to get food or just to hang out, so no worries, it’s not like we’re completely inaccessible if that’s your issue.

There are lots of other external factors I could pick at … in fact I’m working on a Fetiquette blog post so stay tuned for that … but I realize it’s probably just me. I am (a) going through one of my moods, (b) outgrowing Caribana mas, or (c) both of the above. The mood swings, those are pretty par for the course and it has been an emotional spring/summer for me. Outgrowing things that you used to live and die for when you were young, I guess that’s normal too (even if it doesn’t always feel good). So I guess we’ll have to wait until next year to see whether Caribana 2013 was “de las lap” for me. 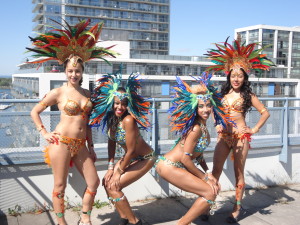 The two ladies on the ends, Fiorella and Jenny, are repping Saldenah (congrats for winning Band of the Year!) and Tiff and I are both with Carnival Nationz.