… and today is my day off, so my goal is to bang this out and get back outside =)  (Today I finally got to the beach.  Video footage here.)

So, Jo Maharaj and I have finished our first week of shows at the White Orchid Lounge (Palm Tree Court, Jebel Ali Golf Resort, Dubai). 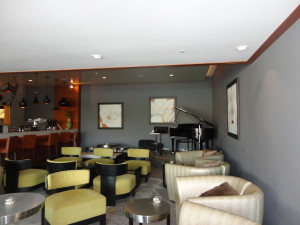 With the creative band name of “Jo & Chattrisse” (yep, really), we have entertained several dozen guests for four sets a night since Monday night. 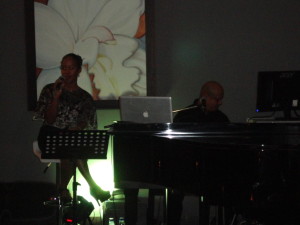 We have crooned, laughed and sometimes improvised through such varied songs as Sweet Love by Anita Baker, Beyonce’s version of Fever (we’ve done those two every single night so far), Rehab by Amy Winehouse, Just the Two of Us by Bill Withers, Call Me Maybe by Carly Rae Jepsen, Let’s Stay Together by Al Green, No No No by Dawn Penn (click here to see a snippet of video footage), and Dance with My Father by Luther Vandross.  We’ve had regulars come back for 5 or 6 nights in a row, we’ve had people up and dancing, we’ve even had the power cut out on us more than once.  (That’s when your improv and/or a cappella skills come in REALLY handy!)

We’ve garnered fans, like 5-year-old Daisy who left us this note: 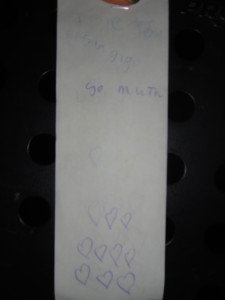 It says “I love your singing so much” =D 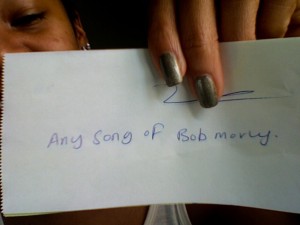 We get more requests for Bob Marley than for anyone else, and people from every background you can imagine are singing along, bopping their heads, or up and dancing. #proudtobeJamaican

And I am already so wholeheartedly grateful that I’ve been given this opportunity.

If you or someone you know is in the Dubai area and wants to check us out, come through!  No cover, if you’ve got questions you can leave a comment here or at www.facebook.com/chattrisse.

And with that – it’s lunchtime!  Feel free to stay in touch via Facebook, Twitter, YouTube, and of course right here at www.chattrisse.com.  Thank you so much for your support and well wishes; bye for now!!!